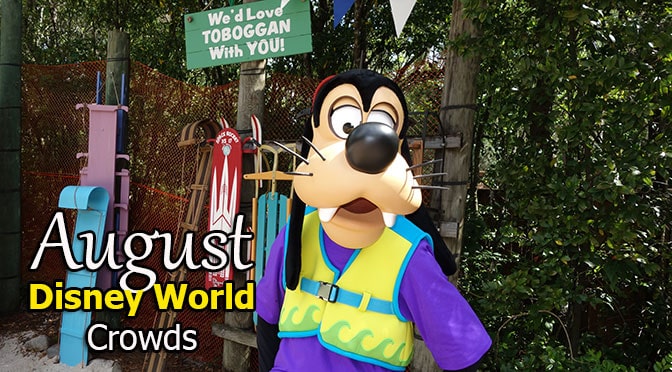 Disney World Crowd Calendar August 2020 brings us an insanely hot and rainy month. It’s the second wettest month historically, so expect an afternoon thunderstorm most days of your vacation.  I know it’s known as the “Sunshine State,” but that is just a marketing ploy.

It rains often here, especially in the summer.  The first week and a half of August  is end of the busy summer travel season at Walt Disney World, so the parks are quite crowded initially.

The parks begin to lighten around mid-month and will continue with moderate crowds through the rest of the month.  The last week of August is the best time to visit Walt Disney World in the summer season, if you children haven’t started school or you are willing to allow them to miss time.

September is the preferred month as far as crowds are concerned and is among the best times to visit.  Regardless of the times you can still enjoy the parks by going to a green park, arriving at least 45 minutes before rope drop and following one of my TOURING PLANS to get the most out of Mickey’s Not So Scary Halloween Party and Epcot Food and Wine Festival begins in August 2020.

I recommend the strategy of arriving early and taking a mid-afternoon break.  Go for a swim with the kids and enjoy the pool, then take a nap of an hour or so before returning to a park for evening entertainment and rides.

Will the park hours for Magic Kingdom, Hollywood Studios and Animal Kingdom be extended?

Yes, it’s highly likely that the park hours will extend for many dates in August.  Disney usually releases preliminary hours, then adds hours the closer you get to your trip.

What will the weather be like during your August trip?

August  is the second hottest average month and 2nd rainiest in Orlando.  If you factor in the humidity, it can feel almost unbearable in the mid-afternoon.

Dress in light colors and wear comfortable shoes with socks that breathe.  Bring a small, handheld fan for each child.  Bring a poncho for each person and a stroller cover because there’s often afternoon thunderstorms in the summer.

Should I use Extra Magic Hours privilege?

Avoid the trap of visiting a park on its longest hours day.  More people will be there and the wait times can be 30% to 100% higher than other days.

If you are planning to use Extra Magic Hours, use the morning ones, they are a great benefit, if you leave after lunch or parade time.  Avoid the parks that offer evening Extra Magic Hours because they have large crowds at night and many rides have long lines (Hollywood Studios and Epcot).

The exception would be the Magic Kingdom late at night because most guests won’t stay up that late at night. The park usually clears out a good bit after the fireworks.  If you choose a Late Extra Magic Hour park, you should plan to sleep in the next day.

Be sure to print in landscape mode with background image turned on!

Now available to all subscribers on CharacterLocator

Disney now prohibits Guests from doing this on Space Mountain