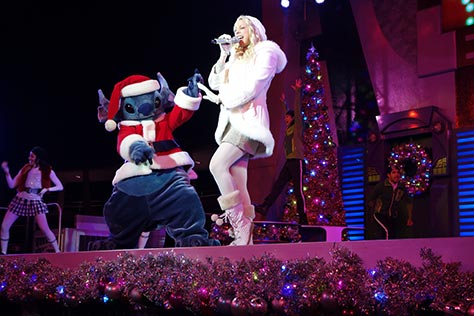 Mickey’s Very Merry Christmas Party Entertainment includes Mickey’s Merriest Celebration, A Totally Tomorrowland Christmas,  Mickey’s Once Upon a Christmastime Parade , Holiday Wishes,  along with character meet and greets and free cookies!  The dance parties offer you an opportunity to dance the night away with your favorite character and are available throughout the party.   I recommend visiting Celebrate the Season, A Totally Tomorrowland Christmas and the dance parties later into the night in order to make the most of your limited time. Cinderella Castle Dream Lighting (A Frozen Holiday Wish is presented every night from early November through New Year’s, the Castle is awash in over 200,000 glimmering lightcicles.  It’s a great site to behold and there’s a short show that ties it all together involving  Anna, Elsa, Kristoff and Olaf!  You can see this show ANY holiday season night, so save it for a different night and get in line to meet the Dwarfs! Holiday Wishes is a fantastic fireworks show. It combines pyrotechnics and festive holiday music and even has a 180 degree finale of vibrant explosions that will really shake you. It’s a pleasant mixture of reds and greens presented with number pyro giftboxs.  Be sure to stand somewhere behind the Walt and Mickey statue. If you get too close, you’ll miss some of the timed fireworks. If you get too far away, you won’t be able to see the projections upon the castle. I recommend standing somewhere between Casey’s Corner and the Tip Board on Main Street for the best view. Arrive 15-30 minutes early for the best locations.

Mickey’s Once Upon a Christmastime Parade A terrific and very long Christmas parade!  During the parade many great characters parade past, but the highlights are the marching Toy Soldiers who actually play their instruments and jolly ole Saint Nick. I recommend attending the second parade. You won’t have to secure a spot as early. The best spots for the first parade are usually taken 60 minutes early and the same spots could be found for the second parade 15-30 minutes early.The “Kringle Krew” will appear along Main Street prior to each parade performance to dance with willing guests and get them into the spirit of the season. Mickey and his pals invite some of their friends over for an unforgettable Christmas party filled with music, dancing, color and fun. Look for Woody and Jessie from “Toy Story,” Fantasyland friends such as Peter Pan and Snow White, and many more! A Totally Tomorrowland Christmas Show is like no other Christmas celebration.  Stitch doesn’t understand the meaning of Christmas and it takes Buzz and Mike Wazowski to keep him from laser blasting Santa out of the sky.  It’s a hokey, but fun show that includes a Michael Jackson style dance number.  It takes about 20 minutes and there’s no crowd for the final show of the night!  It’s a great way to close the night.

Listen to classic Christmas tunes with a country twang!

in Storybook Circus – Characters to be determined