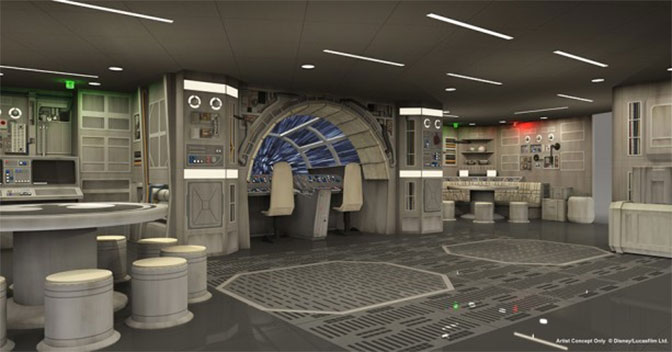 A Target-exclusive Blu-ray version of Solo: A Star Wars Story has provided us with a few details of the upcoming Millenium Falcon ride coming to Galaxy’s Edge in Disneyland and Disney’s Hollywood Studios.

The Millenium Falcon ride will offer 7 pods of 6 guests each for a total of 42 riders per show.  Each pod will be capable of rotating 360 degrees with action happening all around your pod.

The mission of the ride is to retrieve as much loot as possible during a mission directed by Hondo Ohnaka.  Hondo is a pirate from Clone Wars and Star Wars Rebels.

“You’re truly in control of the fastest and most iconic ship in the entire galaxy. And Hondo, he’s gone ahead and added a couple extra seats so he can get as many of those flight crews through as possible. There are 200 some odd buttons, knobs and switches on the inside of the cockpit and they all do stuff. If you’re the gunners in the center there and you don’t fire back on those TIE Fighters fast enough they’re going to riddle the hull with laser bolts, the engineers in back, it’s really up to them to keep the whole Falcon in working order so they’re back there furiously working away at their various systems.”

This sounds like a great experience with the ability to actually interact with your environment, rather than sitting placidly on a vehicle like Star Tours.  What are your thoughts?

The Entertaining Voice of Magic Kingdom’s Tomorrowland has Passed Away

One of the most popular rare characters is now meeting guests...

This EPCOT pavilion is partially closed