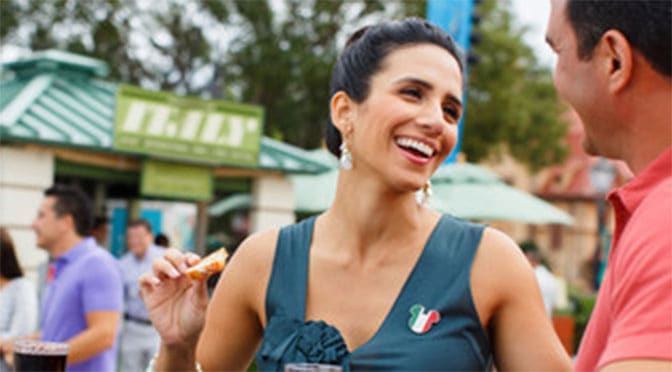 Milestone Celebration Sept. 25-Nov. 16 to Brim with Festival Firsts Across the Park For the first time in the festival’s 20-year history, guests can sip and sample at marketplace experiences — now numbering more than 30 – in the park’s new Future World tasting areas. Festival guests also can see “The Chew” tape five shows before an Epcot audience Oct. 7-9 to air Oct. 12-16.

Disney chefs and festival programmers are whipping up a feast of surprises to celebrate the 20th annual festival in style. New wine tastings, lively parties and other culinary experiences built around the 20-year milestone will unite loyal festival fans and first-timers.

During the 53-day festival, presented by Chase and recognized by the Travel Channel as one of America’s top food festivals, Epcot will brim with epicurean discoveries:

The Party for the Senses grand tasting events, and other special beverage and culinary programs require reservations and separate event admission. Guests can call 407/WDW-FEST (939-3378) and get details at EpcotFoodFestival.com.

Disney dining has evolved to meet the discriminating tastes of its guests, offering innovative, fun and healthful choices. Disney delivers everything from stellar, award-winning restaurants to immersive meals that transport guests into cherished stories. There are more than 450 places to eat at Walt Disney World Resort, including fine dining in unforgettable settings, Disney character dining and quick-service restaurants. Behind-the-scenes innovation leads the way with allergy-friendly menus at up to 120 quick-service and table-service locations. Walt Disney World Resort also is one of the largest single-site purveyors of wine, with more Level One sommeliers than any other company in the world. Each year, Disney’s culinary team creates fresh dishes and new beverage choices for special events including the Epcot International Food & Wine Festival. For more information and to make reservations visit www.disneyworld.com/dine.