As of today, February 23, Anna and Elsa move back to another 9:00 am start time.  It’s been rather confusing with them switching the schedule back and forth each week, but they are supposed to continue with the 9:00 am opening for the foreseeable future and hope to expand from 9:00 am to 9:00 pm soon.  I recommend arriving at Epcot one hour before park opening and making a run to their location.  Get a Fastpass+ for either Test Track or Soarin’ and riding the other late at night.  If you are willing to split your party, you could FP+ Soarin and do Test Track as Single Rider.

Rosetta was supposed to become the de facto pixie to meet opposite Tinker Bell in the Nook this Spring, but something strange began occurring, other fairies began appearing randomly.  Why is this?  Well, you may recall that I mentioned a while back that Tinker Bell’s Nook will eventually close and it will be ONLY Tinker Bell at Town Square Theater.  So, the Magic Kingdom is allowing guests some final opportunities to meet the other fairies rather randomly over the next few weeks.

Will the new Pirate Fairy appear at Walt Disney World?

When is Character Palooza on X Day or in X Month?

I get a TON of people asking me when Character Palooza will be when Fantasmic is a certain time (many not listed on my site) or in a certain month.  I try to only provide details that have been provided to me and that I have observed or friends have observed.  It’s a totally unpublished meet and I have to do some digging to find this information.

The basic rule is that the first Character Palooza occurs 4.5 hours before the LAST Fantasmic of the day, but it may not be exact.  With that said, I just don’t have the time to answer all the questions about when it MIGHT happen in June, on a certain day of the week or in 2015.  I’m not trying to be rude, but I do work a real job and have a family and can’t answer every question for someone hoping to hyper plan their day in June, July or August.  I provide the information each week in my app and have a basic overview on this site.  If you don’t see it here, it’s because I don’t have that information yet.  Please understand that I don’t answer every question concerning a character’s meet and greet time, because all that data is in my app and is linked to on this site for free if you don’t wish to purchase the app and support the site.  Thank you for understanding! 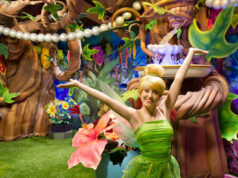