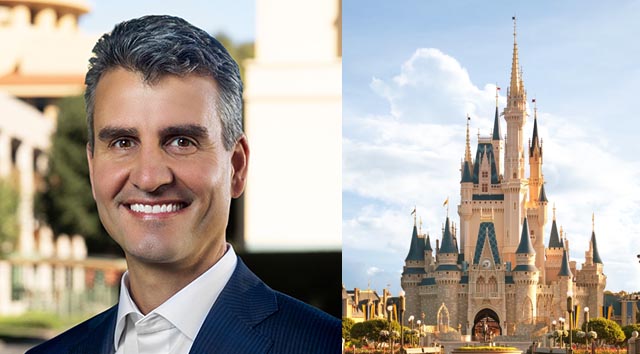 Bob Chapek, CEO of The Walt Disney World company, announced today that Josh D’Amaro would be named the new Chairman of Disney Parks, Experiences, and Products.

He succeeds Bob Chapek now that Mr. Chapek is the new CEO, after Bob Iger stepped down in February.

According to BusinessWire, Mr. D’Amaro will oversee Disney’s iconic travel and leisure businesses, which include six theme park-resort destinations in the United States, Europe and Asia; a top-rated cruise line; a popular vacation ownership program; and an award-winning guided family adventure business.

Chapek stated: “Josh is an exceptionally talented, enthusiastic and innovative leader, consistently delivering strong results while demonstrating his unwavering commitment and care for our cast members, and a genuine appreciation for the importance of the Disney Difference to our guests.

I am certain he will take Disney’s Parks, Experiences and Products segment – home to some of our company’s most iconic and beloved businesses – to exciting new heights in the years to come.”

Mr. D’Amaro stated the following in regards to his promotion: “I want to thank Bob for giving me this opportunity and I look forward to following his record of driving innovation, value and growth as we deliver unforgettable experiences for our guests. It is an incredible honor to lead our team of talented and dedicated Cast Members around the globe, who go above-and-beyond every single day.

Even during this challenging time, their enthusiasm for what we do is unwavering, and my goal is to bring our Cast Members back to work as soon as possible so they can continue to create that magic.”

Additionally, Rebecca Campbell was named the Chairman of Disney’s Direct-to-Consumer and International. Both D’Amaro and Campbell will report to Chapek.

Congratulations to both Mr. D’Amaro and Ms. Campbell! Follow us on Facebook for more Disney news and updates!