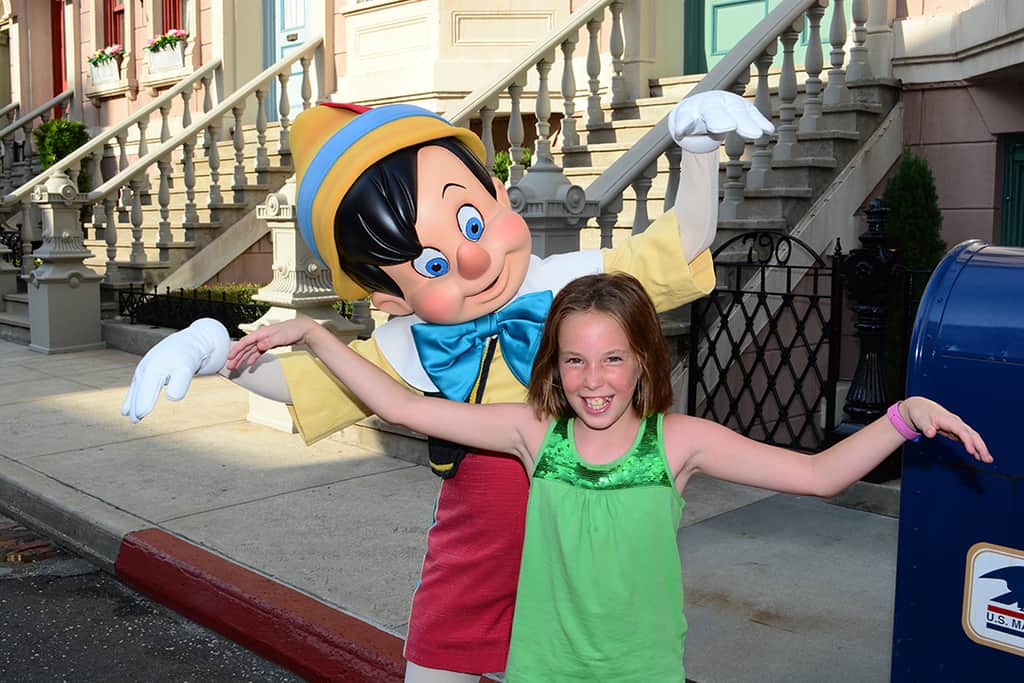 We dropped in on Saturday afternoon and saw the Streets of America abuzz with meet and greet action.  It’s funny how many people don’t know this exists and just stumble upon it.  I’ve observed recently that the summer appearance can vary from 5:55pm to 6:10pm, so arrive a few minutes early!

Our goal Saturday was to ride Expedition Everest and Dinosaur and take part in the Dinoland Dance Party at Animal Kingdom, then hop over to Hollywood Studios to take in Character Palooza and the new Rock Your Summer Side Dance Party.  We succeeded at everything except Dinosaur which went down while we were there.

We arrived at Character Palooza and Jordyn was hot and tired and was going to sit on the steps and wait on Debbie to meet some of her favorite characters…until she saw Max!  In the same day Jordyn got to meet Mushu and Max for the first time, so she was pretty happy.

Max had a very short line because most of the kids ran to Aladdin and Belle.

So I asked for a quick photo of us together.

I let Debbie determine what characters we would meet and what order we would meet them.  She chose Pinocchio next.  I told you she gets all the hugs!  I think she could melt Olaf with her character love.

They decieded to pose like puppets on a string.

From there she noticed Jessie way off by the Premier Theater and ran over to get in line.  There were exactly 2 families in line for her.  At the Magic Kingdom, you might wait up to 30 minutes to meet her.

She then decided that a meet with Captain Hook was in order and there was NO ONE waiting to meet him at that moment.

She wanted to finish up with a meet with Aladdin and Genie.  There were only a few minutes left and she was unsure if we would make it.  I think we were the last family to meet them.  Aladdin recognized us and asked if we would be returning again on Sunday.   I sure wish Genie would help me out with a plane ticket to Paris, but I guess Al is keeping all the wishes to himself!  How about at least a magic carpet ride there?

Here’s a couple of photos of the lines. You’ll notice that most characters require 5 minutes or less to meet and many of them can’t be found outside of Character Palooza

My little girl was excited with her Character Locating for the day!  In less than 15 minutes we had met Max, Pinocchio, Jessie, Captain Hook, Aladdin and Genie.