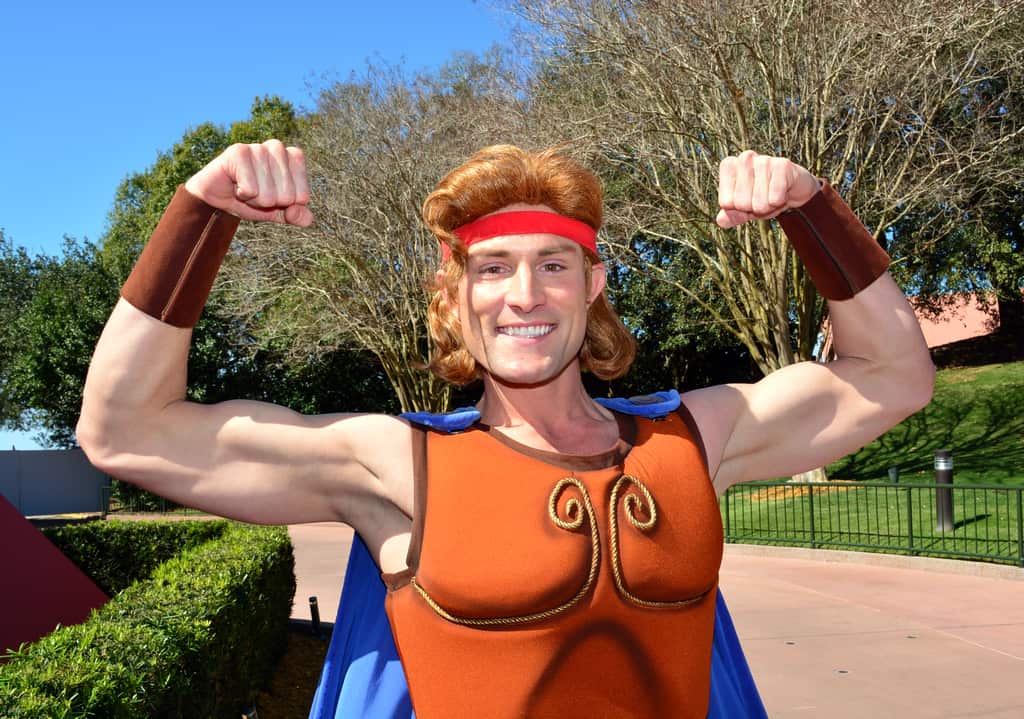 We had the opportunity to meet the great Greek demi-god Hercules at Epcot’s Imagination Pavilion today.  He only appeared for one day only in preparation for an upcoming event.  Some were saying it’s a Cast Member event, while other hoped it would be for the upcoming Marathon.  I’m not positive, I just know you shouldn’t expect to find him at Epcot again any time soon. It as funny hearing so many people going all silly when they met him, but Hercules handled it with a great deal of humility.  One young lady was all giddy and he said, “I’m just a guy like you.”  She said, “but you’re the son of Zeus.”  His retort was, “Oh there is that.”  He explained how he gave it all up so he could spend more time with Megara (whom I had the opportunity to meet a few months back).  I told him we met Meg a while back over near the United Kingdom and we were over in that area this morning, but had to run a marathon to get over to Imagination Pavilion to meet him.  He appeared twice at Imagination.  Some reported that he went over to the International Gateway later, but I didn’t head over there to confirm.

He was posing with the wall of the Imagination Pavilion at his back.  The Cast Member explained that it gave him the Greek God halo over his head. I asked politely if he would turn so the background would be a little more interesting.  The girl behind me in line said, “Who cares about the background.” After meeting him the second time, I asked if he would be hanging around.  “Oh gee, I don’t know. Phil has the rest of the day pretty much booked”

He went from Zero to Hero in our autograph book. While we won’t see him around Epcot, I have a sneaking suspicion that we may see him again in Walt Disney World in the not-to-distant future ;-)