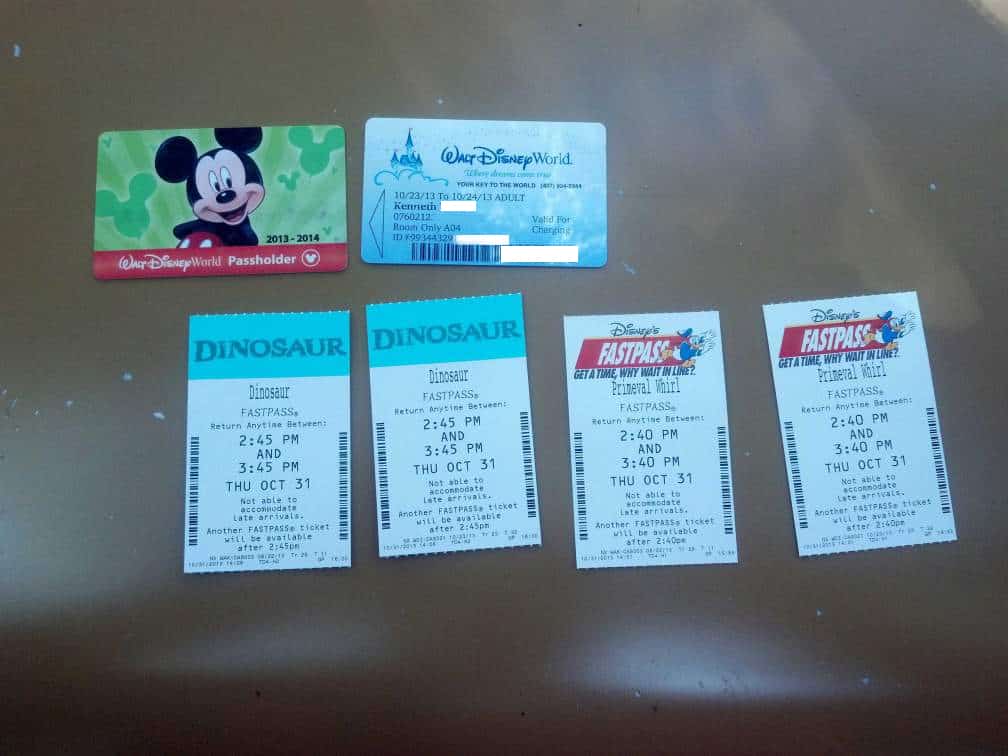 Yesterday I traveled over to the Animal Kingdom about noon to do some Fastpass testing.  I recently did a small amount of testing at the Magic Kingdom in my Triple Dippin post.  That post would do a poor job demonstrating how to maximize FP and FP+ though.  I will write a new article soon about how you can use FP at the Magic Kingdom and get 8 Fastpasses and use FP at every possible attraction with as little back-tracking as possible.

So, onto the Animal Kingdom on Halloween.  (Queue ominous music).  I started out my day with 3 Fastpass+ reservations.   I had reserved Expedition Everest, Mickey and Minnie and Kilimanjaro Safari.  As I entered Animal Kingdom I headed straight over to meet Mickey and Minnie using my FP reservation.  The posted wait was 20 minutes.  Using FP+ I waited 8.21 minutes according to the Wait Time feature in our Android version of Character Locator. After meeting Mickey and Minnie, I made a beeline straight for Primeval Whirl.  Why Primeval Whirl?  Because I wanted to test the paper Fastpass system and retrieved these Fastpasses below.   As you can see, I used my Walt Disney World Annual Pass that is still connected to the Fastpass+ system and a recently expired Room Only Key to the World from Pop Century (11/14 NOTE: Pop Century is no longer offering KTTW cards that will offer paper Fastpasses!).  I could have easily used one card to secure a Fastpass here and the other card to secure one at another attraction, but I chose to do this for the purpose of testing.  If you click the image for a larger view, you’ll see that they were retrieved at the same time.  Trash cans to the rescue again.

On my way to Dinosaur I saw this typically long line to meet Goofy and Pluto in Dinoland.  This line will take you 30 minutes or more depending upon when their brief water breaks are during your time in the queue.  They were handing out candy for all the kiddos on Halloween at this meet, the Winnie the Pooh meet and the Camp Minnie Mickey meets, but not at the Mickey and Minnnie meet. Who needs a meet and greet when you can just say hi to Goofy as he passes in his Halloween costume? Then I retrieved these Fastpasses for Dinosaur using the EXACT SAME media as Primeval Whirl.  So what does that tell us?  One of these attractions is not connected to the remaining paper Fastpass system and is essentially a FREE Fastpass.  Wanna guess which one?  I’ll tell ya later. From there I headed over to Expedition Everest while I was still in the same return window and found that Everest is indeed connected to the system and it told me that I had Fastpasses for Primeval Whirl.  Ah, man, my later to be revealed secret is blown!  Now you won’t read the rest of the post.  Dinosaur is NOT connected to the paper Fastpass system, so it like Mickey, Dumbo and Barnstormer in the Magic Kingdom are essentially FREE Fastpasses and you should never waste a FP+ reservation on these when they are giving them away. I headed over to Kali River Rapids to do the same test and learn whether it is connected to the system.  Along the way DJ Anaan and his Bollywood Dancers were out.  This isn’t intended to be a knock on the DJ or the dancers, they are each talented performers, but there’s almost NEVER anyone dancing here.  At this moment there were 3 little girls involved.  The girl in white was dancing, and seemed to know every move, while the two little girls were comparing nail polish colors.  Could we just bring back some retired characters please??? So, back to the Fastpass discussion.  I grabbed paper FP for Kali and found that it is indeed connected to the system.  Still can’t get another one until that beloved Primeval Whirl FP times out.  Nice shot of the perforations at the top and bottom huh? Hustling along the path toward Kilimajaro Safaris I noticed a young padawan Jedi patrolling the area.  It’s nice to feel safe when touring a Disney park! Whew!  Made it all the way from Dinosaur to Safaris with 7 minutes to spare.  Not too many people are running around Walt Disney World attempting to get Fastpasses that don’t even work, huh?  The things I do for love, things I do for love…  So, Safaris are connected to the system and I am an excellent hand model! What did we learn from this little experiment?  I can easily hold 6 Active Fastpasses at one time in the Animal Kingdom and here’s how:

1.  Book 3 Fastpass+ reservations (don’t bother with Dinosaur)  If Mickey and Minnie is important to you, chose them as one.

2.  Go to Dinosaur a little before you plan to ride and retrieve a paper Fastpass using a hotel key or annual pass.  It usually has a return time about 40 minutes into the future except in the busiest seasons when it could be like 2 hours out.  This is a FREE Fastpass!  You could take in Primeval Whirl and Triceratop Spin or meet Goofy and Pluto while your Fastpass is charging.  I would only use FP if the wait time exceeds 15-20 minutes anyway.

3.  If you have a Key to the World (Hotel key) then head to an attraction like Primeval Whirl, Expedition Everest, Kali River Rapids or Kilimajaro Safari and retrieve another Fastpass using that.

4.  If you have an Annual Pass, use that to retrieve another, different Fastpass for Primeval Whirl, Expedition Everest, Kali River Rapids or Kilimajaro Safari or get a second one if it’s a favorite for you.

We now have 6 FASTPASSES.   3 FP+ and 3 paper FP using the Magic Band, an old hotel key and a current Annual Pass!